By Naomi Ndichu.
A tree is a living thing inform of a plant that grows on land. There are different kinds and species of trees growing in different part of the country. Some trees are indigenous, like pine, cider, Olive Africana Etc. While others are exotic. Exotic trees ere introduced and planted in a given area, for example, Cyprus, Eucalyptus and fruit trees. Read full story
Posted by Unknown at 7:11 AM No comments:

Ngarua Maarifa Center is located at sipili trading center, Ngarua Division of Laikipia west District. The center offers computer trainings, and various information to communities free of charge. The need to offer such trainings stemmed from the vision of ''connecting communities with knowledge'', through I.C.Ts....Read full story

A FIELD VISIT TO NGOMONGO FARM. 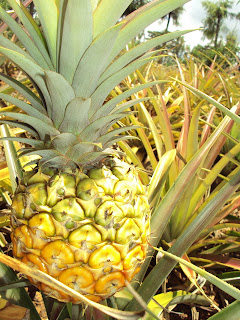 Ngomongo means ''a rocky place''. Farmers in the area must first remove stones from their farms to create space for crop production. Thomas Ngwiri have done it excellently, and he have created a nice farm, one can hardly believe it used to be rocky. Stones from his farm were more than enough for him to build a house and sold the surpluses. Even after doing that he still remained with several heaps of stones. The stones are arranged along the fence to give room for crops to grow.

Accessing, crops market is a great challenge, he has always sold his fruits at throw away prices at Sipili trading center. However he is optimistic that the introduction of e-marketing shall solve the problem. Crop pests, diseases and wild life attacks on farms are a real menace in Ngomongo! Pineapples are frequently destroyed by elephants straying from a nearby forest. ''Whenever an Elephant enters your farm, you only wake up the following day to count losses'' Says Ngwiri.

Elephants feed on the edible part of pineapples and can take time to look for the ripe ones, in the process, destroying other crops. However farmers have devised some means of chasing away the large animals by lighting fire or using a powerful touch to scare them away.

Porcupines on the other hand pose a threat to the hard working farmers. A single porcupine can feed on up-to ten to twenty ripe pineapples per night. This can be a source of great discouragement to a farmer. One day when Ngwiri was visiting a friend, several kilometers away from home. They happened to discuss the ongoing at their homes and farms. The sharing came with a sigh of relief for Ngwiri; He learnt how to trap the disturbing rodent.

The techniques of trapping the large rodents is simple. One just needs to fold a wire mesh to a Conical shape, the wire is made in a manner that the entrance is enough for a porcupine to get in, then it gets smaller and smaller towards the other end.

When the trap is ready, a farmer takes it to the hole from where the animals get into the farm. An innocent porcupine will squeeze itself into the trap, as it tries to get into the farm, and because the traps get thinner and thinner towards one end, the poor animal tries to move backwards on realized the going is not getting any smoother.

The prickles covering the entire body of the porcupine, gets trapped in the wire mesh preventing the animal from escaping. Early in the morning the farmer just goes to check the trap thus finding the animal inside.

Immediately he got the information, Ngwiri did not hesitate to try it, the results were quite encouraging', for a while his pineapples were not attacked. Once a porcupines is killed the rest can quickly sense danger and will not come to the same place again.

When he was done with the porcupines he thought it was time to relax and enjoy the fruits of his labour, little did he know that another pest in the name of wild birds, would come knocking. He discovered a wild bird which feeds on the pineapples leaving a shell of an outer covering, like porcupines the bird also feeds on ripe fruits. Mr. Ngwiri started covering the ripe pineapple using  black polythene packs.

Soon afterwards the mischievous birds had discovered that, the black paper indicates where a ripe pineapple is, and their search for the fruits was even made easier. On realizing this Mr. Ngwiri withdrew from using the paper packs. Ngwiri now shares the skills with other farmer whose crops have been destroyed by the birds and porcupine.

You are on the Ngarua Maarifa Centre's Blog. This is a community based I.C.T hub, that gives the communities of Ng'arua a platform to express themselves. And share their Knowledge and experiences with the rest of the world.